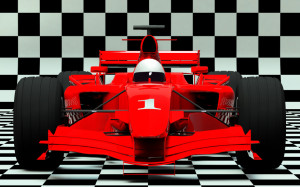 Silverstone 2016 saw the second race of the season start under the control of the safety car. But rather than being dull, it initiated a breathtaking series of pit stops as the whole field changed from wet to intermediate tyres within a few minutes of each other.

At one point, you could actually see both Hamilton and Rosberg, the Mercedes team mates, in the pits at the same time.

Blink and you would have missed two perfectly executed, full tyre changes with no waiting. Check out the race highlights at around the 1 minute mark.

Each stop takes about 2 seconds. The fastest ever recorded was at the US Grand Prix in 2013, when Mark Webber’s stop was timed at 1.923s 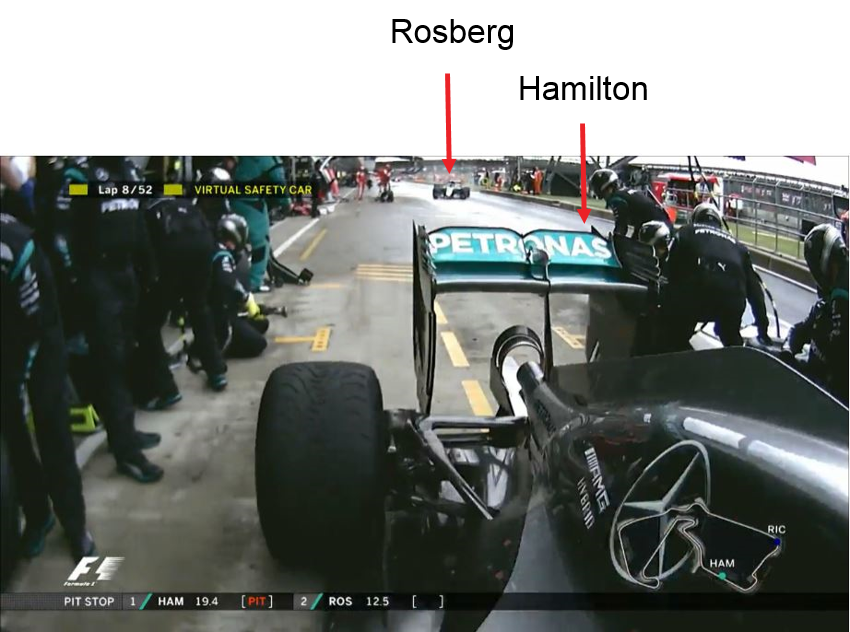 How do they do this?

It’s all based on the principles used for SMED; the lean technique we use to reduce the time it takes to change a machine from making one part to another.

In F1, the pit stop is the equivalent of the machine downtime. The aim is to get the car back racing as quickly as possible.

F1 pit stop tricks we can use in manufacturing

Every one hundredth of a second counts on a pit stop. Here are some of the key waste elimination tips the pit crews use. These apply equally to our own machine changeovers.

1) Preparation before the stop is key

The whole crew discuss and clarify their targets the night before the race.

A few laps before the car pits, the crew receive warning and get into the right mindset.

2) Use precise locations for everything

The car drives in and stops in a precisely marked position. This ensures it is jacked straight up with no time lost adjusting positions.

These exist for all common scenarios; wheel change, nose cone replacement, punctures, cleaning rubbish from the air intakes and adjusting the wings to alter downforce.

On race day, there is no tinkering with the procedure. Trying different methods and tooling only takes place in controlled sessions back at the factory.

The crew practise their set procedures as a team and individuals practise specific skills. The crew on the high speed air guns practise getting on the nut first time. The jack men practise clean lifts. The drivers practise stopping exactly on the marks.

The most frequently damaged parts are designed with quick changeovers is mind. On the nose cone, a quick release catch is used instead of multiple sets of time consuming bolts.

The front and rear jacks have quick release levers as no powered device can be used. The front jack also has a swivel feature that enables the jack man to move out of the way quicker, speeding up car release.

The length of time for F1 pit stops has changed drastically over the years. In this video from the 1950s, it took 67 seconds to change 4 wheels and add fuel.

In the 1990s, when refuelling was still allowed, pit stops had shrunk to 7 seconds. Gone were the men appearing leisurely with wheels in their hands and removing them with hefty belts of a hammer. This table shows how the four step technique helped achieve this reduction.

Even since the refuelling ban, the wheel change element has reduced from 4s to 2s.

Your challenge: Incorporate these tips into the four step technique to further improve your own changeover times.

– July 2016 authored by a Senior Consultant at Industry Forum

Reviewing this very interesting article, one thing struck me, and the title explains it – the word ‘How’.

As an Engineer, I often find myself diving into the detail – How does this work? How to do that? Perhaps though, we should start with asking Why?

Why reduce changeover times? What is the benefit? With the F1 example, it was all about saving time in the pits in order to complete the race distance in the shortest time possible. But in manufacturing, the driving need (if you will pardon the pun) is different. By changing over in a shorter time, you can use the time saved to….do more changeovers!

Because by changing over more frequently, you can afford to produce smaller batch runs (as a shorter time will elapse before you will be making the same part again), and that’s a big benefit!

Because the shorter the batch run, the less inventory you will have to hold. If you make a part once a week, you have to make a batch big enough to cover the whole week’s demand. If you can be slick enough to changeover and make the same part twice a week, the batch size only needs to cover half the week – so the inventory carrying aspect quantity halves. If you can make a batch every day of a 5-day week, you’re down to one fifth of the cycle stock. That reduces risk (obsolescence, carrying costs, and quality issues) and releases cash. In manufacturing terms, that’s a race worth winning…

If you want to understand more about lean techniques, visit our Lean Transformation page or click here to get in touch with Principal Lean Consultant, Mike Scull. You can also give us a call on +44 (0)121 717 6600.