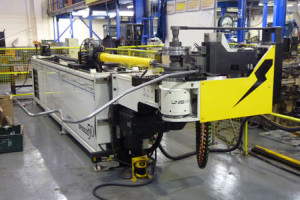 Toolspec – as the name suggests – began as a toolmaking company employing 55 toolmakers and five employees hand-bending tubular components.
But it has re-invented itself over the past 25 years, to become an expert producer of not just tubular parts, but virtually any kind of hollow section ‘road to roof’ assembly for the automotive, construction and agricultural industries.

In the late 1980s though, Toolspec was in trouble and needed to change; its only customer, GM Vauxhall began sourcing tooling needs on the global market rather than from local suppliers.

“So the headcount is now reversed – we have 55 people making tube components and five toolmakers,” explained Toolspec CEO Mark Blythe. “But the latter are still key, because we can make the jigs, fixtures and so on that have enabled us to progress from making simple tubular products to complex ones, while boosting quality and response time, and those toolmakers are also more productive thanks to modern technology.”

This ‘can do’ attitude and ambition to get better and faster is the essence of the Toolspec success story and why it sought AMSCI funding towards a £837k capital investment towards future growth. 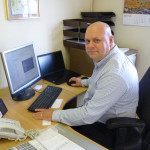 The UK engineering sector is under-valued. We are brilliant at complex engineering in this country, but the manufacturing has often ended up being done somewhere else. Now it’s coming back.

At Toolspec, we are very good at the engineering ability between different processes involved in a complex fabrication, and the AMSCI funding has enhanced our strength and reliability, and speed of response – we can generate a prototype in a couple of days.

We will soon compete with rivals turning over £50m+ a year, while retaining the flexibility and response-time of a smaller concern – we never want to lose our nimbleness”

Funding itself was achieved with the sponsorship of JCB, one of several blue chip Toolspec customers.

Mark Blythe said: “We couldn’t have done it without JCB submitting a bid for the AMSCI funding on our behalf – as a small firm we can’t justify that expertise on the payroll.

“But the 10% £87K grant aid towards our capital expenditure will create nine jobs and, by taking on the SMMT training skillset over the next few years, improving the talent in our business and boosting productivity, quality and all the other hallmarks needed in a fast-moving competitive sector.

“We’ve also taken on younger people who can quickly familiarise with the Windows-based interface on our newest equipment, while experienced guys are re-deployed, speeding processes and products on other machines.”

Mark knows about bringing in new blood: a local boy from Luton, he joined Toolspec 28 years ago as an apprentice toolmaker, rising rapidly to become Manufacturing Director at 24 and CEO seven years ago.

“That means there is nothing I don’t understand about what we make and do and I’m looking for more young people to build the company’s future,” he said, adding: “Part of the AMCSI investment also went towards a machining centre, which means that we can go CADCAM there. We always CAD-designed the tooling, but then had to reverse engineer that onto a drawing.

“We make most of our own tooling too, rather than often having to ask a customer to fund the bending tools for a job before At a cost of £3-7,000 per set it could be a deal breaker. Now we can cut a set of tools for a new customer within two days, saving costs and a 6-8-week lead time.”

The benefits of AMSCI funding and OEM support has been vital to the success of companies throughout the supply chain being able to produce high calibre components to achieve the continuing growth of the UK Automotive sector.

But the biggest investment unlocked by the AMSCI funding is three new machines: two hi-tech bending machines from fellow UK firm Unison and a machining centre, costing £370k in total.

“The bending machines are the biggest revelation,” said Mark. “They speed up the whole process and cut out most of the waste through measurable accuracy and quality.

“It allows us to make things better, quicker, faster and hunt down better contracts. We’re also more of a ‘one-stop shop’ making ever more complex components.”

About the Automotive Council